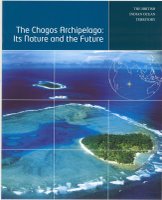 Diego Garcia, in the Chagos archipelago, is back in the international news with the release of a new book in the United States entitled Island of Shame: The Secret History of the U.S. Military base on Diego Garcia, by David Vine. It is what the publishers call a “groundbreaking work that dares to expose the other Guantánamo”. The book was officially launched in Seychelles and Mauritius in June this year. The author will donate all the book royalties to the Chagossians.

Seychellois, especially those of a certain generation, have a good knowledge of the Chagos. The coconut plantation on Diego Garcia was managed from Seychelles. My father’s company on Mahe provided fuel and supplies once upon a time to the Chagos and also exported the copra from there. The Chagossians who returned to Seychelles integrated into our society, with their Association still very active.Many other people around the world, through the international media, know about the Chagossians and their fight to return to “Diego “http://sailingweights.blogspot.com/2009/07/salomon-atoll-chagos-seychelles.html

What is less well known is that many scientists believe that the Chagos – a UK Overseas Territory – is probably the most pristine tropical marine environment on Earth. The archipelago has the world’s largest coral atoll, its healthiest reefs and its cleanest seas, they say

A booklet was launched in March this year called The Chagos Archipelago: Its Nature and the Future, to start a discussion on a programme “to create one of the world’s greatest conservation areas”. The archipelago is described as comparable with the Galapagos Islands or the Great Barrier Reef in environmental and scientific importance. http://www.chagos-trust.org/conservation.asp

The publication flags up the Chagos as the United Kingdom’s greatest area of marine biodiversity by far. The area is a crucial refuge, staging post and breeding ground for marine life, it says. The Chagos also provides a scientific benchmark for an environment without degradation; this is important for helping to deal with problems such as pollution, climate change and loss of biodiversity. It calls for people to support these ideas and encourage the British Government to make the conservation area a reality. This is a great start, in my opinion, as it sets aside a very important area of the planet and defers benefits to future generation – hopefully generations of Chagossians whose fate is currently a political hot potato.

Drawing on best practice from other sites, the aims of the conservation area would be: to protect nature, including fish stocks (benefiting countries such as Seychelles in the region); to benefit science, and support action against damaging climate change; and to be compatible with security and be financially sustainable. In my view, one of the major aims should be to provide livelyhood opportunities and environmental services for Chagossians upon their return.

Pollution, overfishing and climate change are affecting the oceans worldwide, but the creation of a conservation area around the Chagos will help preserve this pristine marine environment and secure rich natural heritage that many people say the Chagossians are actually the stewards of.

Nirmal is a well-known and a passionate personality in the Seychelles environmental and sustainability scene having an encyclopedic knowledge of Seychelles biodiversity as well as a wealth of experience in environment management. He has worked in senior positions in the parastatal, government, private and NGO sectors and consulted for international organizations such as the World Bank, IUCN, UNEP, Sida and UNESCO. He has appeared on CNN, BBC, Radio France, PBS, NBC, ABC, SABC and others View all posts by Dr. Nirmal Shah

One thought on “Chagos-The most pristine marine environment on earth?”